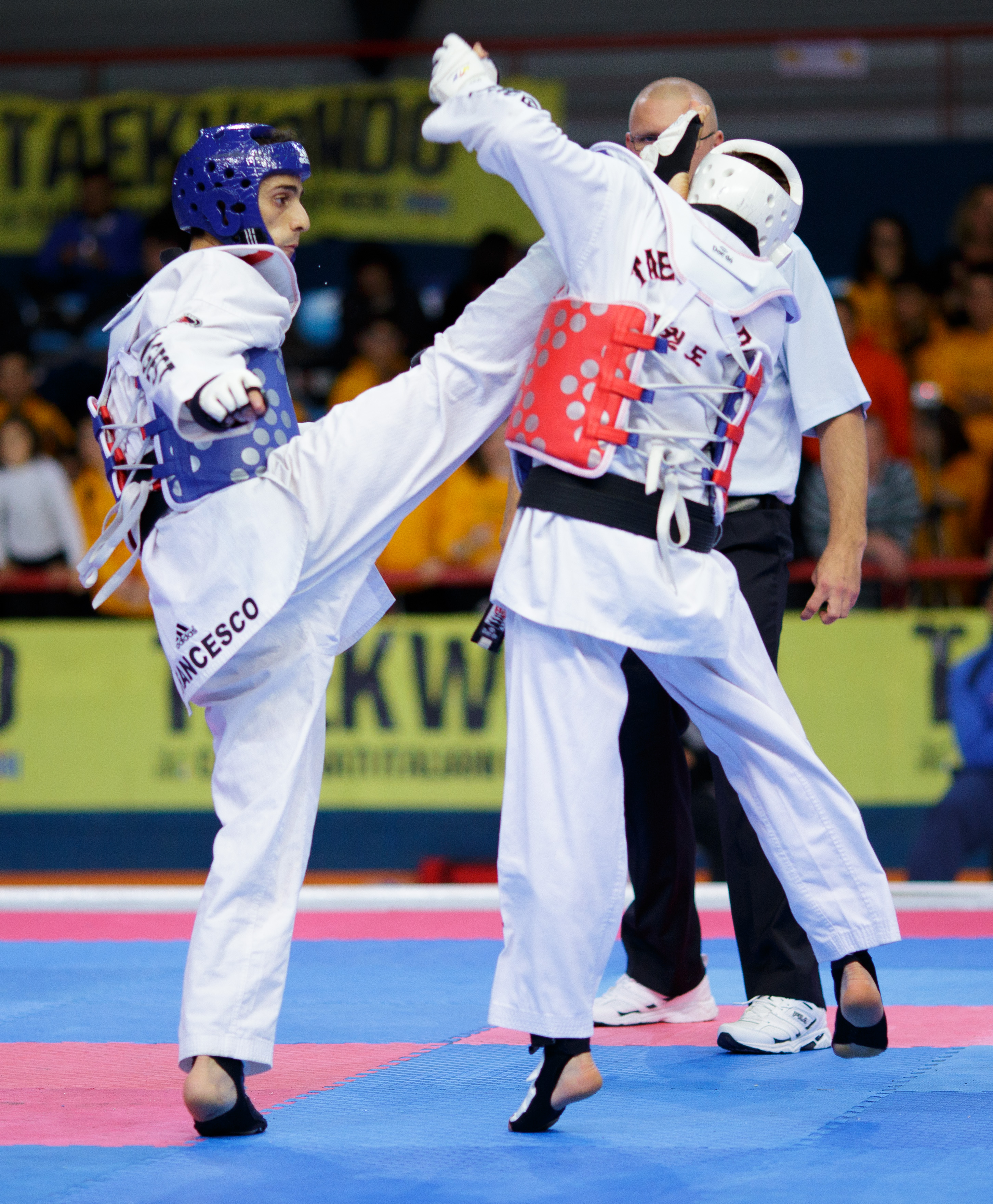 WHAT IS SPARRING IN TAE KWON DO

Under World Taekwondo Federation and Olympic rules, sparring is a full-contact match which is fought between two fighters in a fighting square that measures 8 meters square. There are two ways to win a match. The first is by scoring the most points and the second is a knockout. A knockout is an immediate win. Each fight is three rounds with a one minute break in between, of which the competitor sits with his side coach. Competitors are also fully equipped for each fight. A chest protector, a helmet, feet, shin guards, fist protectors, arm pads, and a mouth guard are some of the equipment a fighter will wear.

In order to score a point, you must strike at the accurate, powerful kicks, and or punches to the permitted fighting areas of the body. If the attack is light handed there are no points scored. The only two techniques acceptable in Tae Kwon Do are kicks (delivering a strike using an area of the foot below the ankle) and punches (delivering a strike using the closed fist). In most events, points are awarded by four corner judges using electronic scoring handles. However, many competitions are now experimenting using electronic scoring equipment contained within the competitors' body protectors. This limits corner judges to scoring only attacks to the head. Some believe that the new electronic scoring system will help to reduce controversy concerning judging decisions.

Throughout the years the kicking techniques have changed in point value. In 2009, a kick or punch that made contact with the opponent's chest protector scored one point. If a kick involved a technique that included fully turning the body, so that the back is fully exposed to the competitor during execution of the technique, an additional point was awarded. A kick to the head scored three points; as of October 2010 an additional point was awarded if a turning kick was used to execute this attack. Punches to the head are not allowed. As of March 2010, no additional points were awarded for knocking down an opponent.

The referee can give penalties at any time for rule-breaking, such as hitting an area not recognized as a target, usually the legs or neck. Penalties are divided into warnings and or full deduction of points. Two warnings are counted as an addition of one point for the opposing contestant.

In the event of a tie, a fourth "sudden death" overtime round, sometimes called a "Golden Point", is held to determine the winner after a one-minute rest period. In this round, the first competitor to score a point wins the match. If there is no score in the additional round, the winner is decided by superiority, as determined by the refereeing officials.

In October 2010 the WTF (World Tae Kwon Do Federation) introduced a point-gap rule, which means that if a fighter has a 12 point lead at the end of the second round and into the third round then the fight is automatically called over and that fighter is declared a winner.